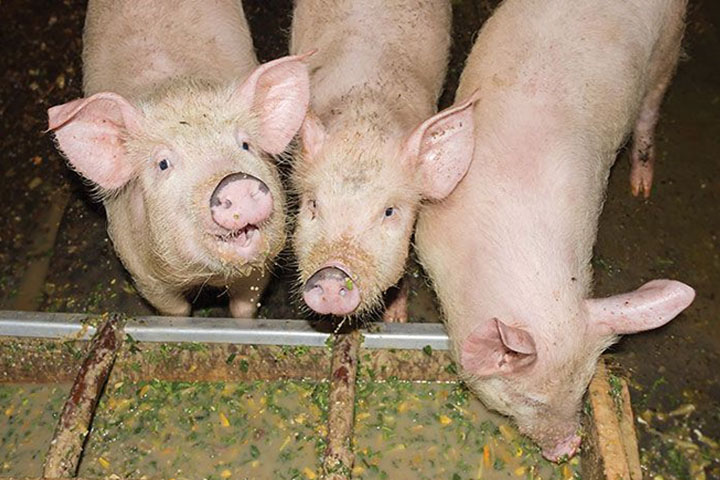 There are many ways to design piglet diets, and one of them involves certain strategies that aim to prevent nutritional diarrheas and avoid complications with pathogenic ones.

Diarrhea is the most common cause of morbidity and mortality in recently weaned piglets. The origins of diarrhea can be pathogenic, nutritional and even compounded through secondary complications. Pathogenic diarrheas require veterinary intervention to cure symptoms and eliminate the offending microorganisms. Nutritional diarrheas usually follow or proceed pathogenic ones, and thus, a combination of nutritional and medical interventions is often required. Obviously, a properly designed nutritional program by a qualified nutritionist should be able to prevent common nutritional diarrheas.

Nutritional diarrhea originates from three main faults in the design of a feeding program:

It is also suggested that diets with a high concentration of simple sugars and minerals may disturb the osmotic balance across the enteric epithelium, causing excessive water secretion in the lumen and loose stools. For instance, by changing the amount of sugars (sucrose and corn syrup solids), dietary osmolality was manipulated between 250 and 700 mOsm/kg. In that study, absorption of water and carbohydrates from the small intestine in piglets increased, and thus chances for diarrhea were minimized, as osmolality increased at similar dietary electrolyte balance. Osmotic diarrhea may not be detrimental to animal performance and health as pigs are able to compensate by drinking more water. Nevertheless, it is a disturbing sight for human operators, and it should be prevented, because it is rather difficult and expensive to differentiate from other forms of diarrhea.

Post-weaning Escherichia coli diarrhea has been long associated with low-digestibility diets, because undigested nutrients in the gut favor proliferation of pathogenic strains of Escherichia coli that cause over-secretion of intestinal fluids and electrolytes in the lumen of the gut. This invariably leads to diarrhea, malnutrition, poor growth and occasionally death. Results from a comprehensive survey in Canada including 34 commercial farms, of which 17 were reporting Escherichia coli problems, indicated that the majority of diarrhea incidents occurred between three and 10 days post-weaning. However, cases as late as 23 days post-weaning were not uncommon.

In farms where Escherichia coli diarrhea was prevalent in nursery pigs, diets were found to contain higher levels of vegetable protein sources (+12 percent), namely soybean meal and canola meal. Also, pigs that suffered from diarrhea were fed diets higher in calcium (+25 percent) and magnesium (+6 percent), both of which increase alkalinity in the gut (Escherichia coli thrives in alkaline conditions). Moreover, zinc oxide use was 21 percent less in diets for pigs that were reported suffering from diarrhea. Finally, electrolyte balance was relatively reduced in diets for scouring pigs (-8 percent). Although this study does not establish a clear cause-effect relationship between dietary composition and Escherichia coli diarrhea, it provides at least an indication that improper diet formulation can predispose pigs to diarrhea, intensify symptoms, or delay recovery.

Edema disease, a complicated enteric disorder caused by enterotoxemic Escherichia coli strains, continues to puzzle veterinarians and nutritionists regarding prevention and treatment of affected animals. A Dutch research group examined affected and healthy pigs from the same herd and concluded that although edema disease is closely associated with the presence of Escherichia coli (O139K82 strain in this case), dietary factors may also contribute or aggravate this intestinal disorder. Affected pigs exhibited symptoms of metabolic acidosis, evidenced by higher blood and intestinal acidity. The researchers speculated that toxins produced by Escherichia coli in the gastrointestinal tract may have a greater chance to cross the intestinal barrier in pigs suffering from metabolic acidosis because increased intestinal acidity is associated with enhanced permeability. Therefore, nutritional intervention strategies to reduce acidocis in the face of an edema disease outbreak may be beneficial. In addition, dietary immunoglobulins designed against edema-causing bacteria may be an additional strategy deserving to be taken into account when designing a special diet for such problems.

It should be emphasized that nutritional interventions after the onset of diarrhea should be made in consultation with the attending veterinarian and nutritionist. Because scientific experiments with infected pigs raised alongside healthy pigs in the same room are practically invalid, practical experience rather than scientific evidence is usually the basis for deriving most recommendations Farms experiencing high incidents of post-weaning diarrhea can follow one or more of the following measures: